The 6th Lord Deramore, who died on Sunday aged 95, was an example of that breed of mildly eccentric hereditary peer whose presence for generations embellished, informed and entertained the "unreformed" House of Lords.

But success finally came in 1997 when, aged 85, he published his first novel. Illustrated on the cover with one of the author's own watercolours, of a naked girl with a teddy bear, Still Waters concerns a young woman who is seduced by a female friend.

After the friend is killed in a motor accident, she falls in love with a divorced man, but cannot have sex with him because she suffers from a rare clinical condition called vaginismus.

This is not funny

Black pupils told to give seats to whites

A white bus driver in Louisiana has been suspended after she ordered black children to give up their seats to whites.

The case has stirred memories of the Rosa Parks protest of 1955 when a black woman refused to give up her seat to a white man.

The unnamed bus driver in Coushatta, a small farming town in the heart of the rural South near Shreveport, allegedly assigned seats in the back of the bus to black children at the beginning of the school term earlier this month.

When several white children got on the bus this week, the driver sent nine teenage black children to the back where there were not enough seats for them.

Ending Welfare vs. a Participatory Society

The celebration of Clinton's worst action - the ending of guaranteed state assistance for those in need - in the US press is sickening. It shows the absolute narrowness of US political opinion. From Left to Right in the US, would fit into the "extreme right" of most Western European political spectra.

Apart from the fact that single men were never well-served by the Nixon-initiated system, the US system was always stigmatizing.

Here is another view. Modern Capitalism is both individuating and destructive of family units. Some people will as part of the system always end up without support, without access to jobs, and with children. This is how the system works. Stigmatizing such people is part of the terror needed to make the system work.

This is what makes me a democratic socialist.

What pisses me off the most though is the hypocrisy of the American right. For them, male worker's wives should, for the good of the children, stay at home to raise the kids.

“My candidate for the greatest technological invention of the past 2,000 years is the condom,” said Dr. Sweeney, a clinical assistant professor at the State University of New York Health Sciences Center and the vice president for medical affairs at Bedford-Stuyvesant Family Health Center.

What about flush toilets?
Posted by Paul Halsall at 9:41 pm No comments:

A maths genius who won fame last week for apparently spurning a million-dollar prize is living with his mother in a humble flat in St Petersburg, co-existing on her £30-a-month pension, because he has been unemployed since December.

The Sunday Telegraph tracked down the eccentric recluse who stunned the maths world when he solved a century-old puzzle known as the Poincaré Conjecture.

Grigory "Grisha" Perelman's predicament stems from an acrimonious split with a leading Russian mathematical institute, the Steklov, in 2003. When the Institute in St Petersburg failed to re-elect him as a member, Dr Perelman, 40, was left feeling an "absolutely ungifted and untalented person", said a friend. He had a crisis of confidence and cut himself off.

What's the point, one wonders....
Posted by Paul Halsall at 4:45 pm No comments:

..This American Life perhaps the greatest, most humane, radio show ever. I was reduced to tears and laughter (at the same time) twice by today's show (The Cat Came Back).

Guess which stories.
Posted by Paul Halsall at 6:54 pm No comments:

Should the Guardian Have This Guy as a Columnist

The audience at a Muslim rally today were told that dying for your beliefs was "just" and the "greatest act of martyrdom".

Dr Azzam Tamimi, a firebrand Islamic academic and self-styled Hamas sympathiser, claimed he is prepared to become a suicide bomber.

Working too hard, even for those leading the Catholic Church, is bad for the spirit, Pope Benedict XVI said Sunday as he greeted tourists at his summer residence outside Rome.

The Worst News Ever in Jacksonville...

...since either the great fire, or the city's current title as murder capital capital of Florida.

Why not in hurricane season? Are they are afraid?

This is the final attack on classical music initiated by this station five years ago.
Posted by Paul Halsall at 6:04 pm 3 comments:

As a Jew who grew up in Nazi Germany in the years leading up to World War II, I can understand her rage. But I think that whatever Mr. Grass has said in election campaigns (usually as a loyal Social Democratic speaker) or in his powerful novels, all essentially on the present or the recent past, retains its value. 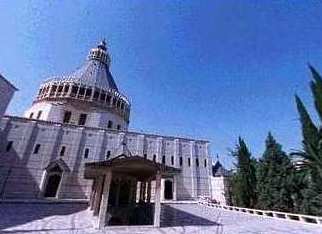 There was only one vistor to the Church of the Annunciation last Sunday.

The death of the wife of the great-grandson of Metternich, the 19th-century Austrian chancellor, as reported in the Daily Telegraph, 8/19/2006.
Posted by Paul Halsall at 2:32 pm No comments:

For millions of pilgrims, a visit to Lourdes to take its miraculous healing waters is an intensely spiritual experience. Since Bernadette Soubirous witnessed the first of 18 apparitions of the Virgin Mary almost 150 years ago, the shrine has become a place of quiet contemplation and religious devotion.

But now the town's peace is being shattered by thousands of British tourists whose behaviour has become so bad that officials have brought in riot police. The decision to deploy officers from the notorious Compagnies Républicaines de Sécurité (CRS) came after local gendarmes admitted that they were unable to cope with the nightly excesses of British visitors who, after going to the famous shrine, take to the town's bars and clubs.

A Sunday Telegraph 8/20/2006 story on chavs wrecking ruin in Lourdes.

I have been to Lourdes twice - as I recall many of those in late night bars were priests...

Update: Live webcams from Lourdes.
Posted by Paul Halsall at 2:23 pm No comments: