Polly Toynbee has posted a reasonable article about the poll-based observation that the vast majority of the people in the UK are happy with their lives as British citizens. She then notes the equally polled observation that few Britons seem to give any credit to the politicians who have actually brought about fairly effective public services. This would include both the Labour government AND the largely Tory controlled local county councils.

In the first 50 comments online (CIF) almost no-one saw even minimal value in what she had written.

The reason is that the Guardian's CIF (Comment is Free) website is now dominated by Libertarian and Tory wingnuts. The kind of people who would watch FOX news in the US.

We in Briton are in fact living in one of the freest, wealthiest, kindest, most artistically productive, technologically innovative countries and periods in history.

And before the Labour government of that period working people starved, and had no health-care. Kids died of easily treatable diseases.

I'm no fan of new Labour, but we need to address the prominence of wingnuts in Guardian/CIF. Not by banning them in any way, but by posting and supporting comments that come from the progressive political majority in this country.
Posted by Paul Halsall at 1:48 pm 1 comment:

The Problem of the Magisterium

Catholic Culture : Commentary : Articles : The One and Only Theological Impasse

This is a typically US-centric article, but none the less interesting.

The problem people like Jeff Mirrus face with the "Magisterium" when you train up intelligent people is the same problem Biblical Literalists face whey they try to train up Biblical scholars. I.e. That a massive, probably, majority part of those so intellectually trained will *to be intellectually consistent in their own minds and consciences* reject the proposed "orthodoxy".

Mirrus himself was notable in the early days of the internet for ludicrous efforts in which he took it on himself to list other Catholic as "orthodox" or "heretics." Doubtless he would have been a witch-hunter in the past.

Conservative notions of the "Magisterium" are to educated Catholics what "Biblical Literalism" is to educated Evangelicals - the place where you have to decide between truth and obscurantism.
Posted by Paul Halsall at 9:47 am No comments:

Something to Make Your Happy - Bear Pole Dance

Posted by Paul Halsall at 9:15 am No comments:

"There’s nothing duller than a young gay man whose curiosity about the world doesn’t appear to extend past his iPod. "

The HIV services group in Manchester - GHT - tried to propose a pride float in which HIV+ people (only those who wanted to) were to ride on top of an open topped bus. This was to be an open challenge to the massive stigma HIV+ men have among other gay people here in the UK. But the "guys" would not do it!
Posted by Paul Halsall at 9:41 pm No comments:

Be Blatent not Latent 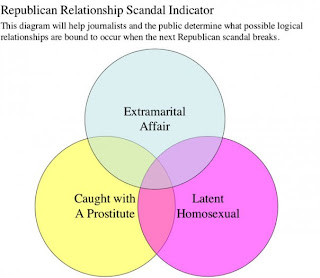 Posted by Paul Halsall at 5:13 pm No comments:

I know a Roman Catholic priest, Fr. Benedict Groeschal of New York who attempted this on a friend of mine.

Fortunately my friend later met a nice German boy, and has lived with his husband for years.
Posted by Paul Halsall at 3:18 pm 2 comments:

I am old enough to have lived through and remember two periods of Tory rule - under Heath and under Thatcher/Major. Although Heath was, in retrospect, more moderate than Thatcher, the whole attitude of Tory governments is to oppose organized power among the working class (i.e Trade Unions) while to support organized power among elites (e.g. Public and Private companies).

While I think some respects Blair and Brown did do some good things - raise NHS spending, actively conciliate in Northern Ireland, enact partial legal equality for gay people (none of which would have been done under the Tories) - I also think New Labour loved business and markets far to much. This has lead to the refusal to renationalize rail, an obsession with false "internal" markets, and a completely catastrophic growth in unjustified administrative bodies devoted to naff business jargon ("stakeholders"/"evidence based"/"branding") and non-transparent "public consultations".

But even New Labour's command and control administrative centralism has had a basically beneficent view of the poor and dispossessed, even if its solutions ("aspiration") are nonsense.

Tories will just attack, because it is they, much more than the modern Labour Party which wages class warfare.

The basic thing about class war is that the working class have never been very good at it. The financial elite have proved repeatedly they are very good at in indeed.
Posted by Paul Halsall at 1:31 pm No comments:

The Coming Tory Cuts Are Not Necessary

On last night's Newsnight I was amused to see Jeremy Paxman's fake shock at the Guardian front page lead story about the Conservative plans to hold a two day Cabinet session to decide how best to cut public spending. From Paxman's reaction, you would have thought it was akin to King Herod wanting to cull the first born.

While I abhor the idea of a Tory government, Paxman was off the wall last night. With a substantial poll lead it would be a massive failure if the Tories were not doing advance planning.

Clearly the government deficit needs to be addressed. But ALL Tory governments tend to do this is ways that hurt the already poor and minimally help the upper middle class, and give away wealth to the financial elite.

There is no reason for Labour not to campaign on this issue. And point out that the deficit can be contained by a combination of some cuts (Trident, ID Cards, ending PFI), actively using public ownership of the banks to frustrate the greed of the rich, and, yes, by raising income taxes.

The Tories, as it is, want to punish the poor for the crisis caused by the rich and upper middle class.
Posted by Paul Halsall at 12:56 pm No comments:

“By the 50th anniversary of Stonewall, what do you think (or hope) might have changed in scholarship on LGBT issues? Please construe this as broadly as you wish. Is there an incipient trend now that will come to fruition over the next few years? Do you see the exhaustion of some topic, or approach, or set of familiar questions? Or is it a matter of a change in the degree of institutional acceptance or normalization of research?”

A really interesting discussion of gay history. I don't agree with all the view expressed, but they are serious positions. Doug Ireland is, as usual, on the money.
Posted by Paul Halsall at 7:39 pm No comments:

I don't really have a lot to add to the online commentary about Iran. I think the Huffington Post, Andrew Sullivan and The Guardian are excellent sources.

However, I have changed the colour of the blog to Green to support those fighting theocracy in Iran.

Via Andrew Sullivan
Posted by Paul Halsall at 7:29 pm No comments:

Some gay and lesbian (and bisexual and TG) Americans are getting annoyed with Obama. I can see why.

But he remains the best political leader in my lifetime. Obviously he is not perfect.

But he's doing better than anyone could have hoped.
Posted by Paul Halsall at 6:32 pm No comments:

Something to Make You Happy - Star Trek Meets Monty Python

Posted by Paul Halsall at 5:52 pm No comments:

Well - How the Food Makers Captured Our Brains - NYTimes.com

Dr. Kessler reports that the Snickers bar, for instance, is “extraordinarily well engineered.” As we chew it, the sugar dissolves, the fat melts and the caramel traps the peanuts so the entire combination of flavors is blissfully experienced in the mouth at the same time.

I don't understand why this is a bad thing.
Posted by Paul Halsall at 3:55 pm No comments:

Something to Make You Happy

When a predominantly gay synagogue in Manhattan learned that a group of ultra-Evangelical Christians were planning a protest outside their building, the congregation decided to turn the hate rally into a fund-raising event.

The synagogue heard several days in advance of the church's planned demonstration and decided to counter the protesters' publicity drive with one of their own, rather than pursuing legal action. The congregation encouraged its supporters to donate at least $1 for every six minutes that the demonstration lasted.

Following the 51-minute protest, the synagogue was able to raise more than $10,000 in donations. The congregation, which has been renting the West Village space, hopes to eventually buy a building of its own.

Some 150 people - including members other nearby synagogues and churches - held a counter-demonstration during the fundraising event, where they sang Jewish songs and prayers.

The Westboro Baptist Church is run by Fred Phelps, an outspoken evangelist who claims natural disasters and terrorist attacks are the result of America's "tolerance" of homosexuals. Phelps targeted Congregation Beth Simchat Torah because it works primarily with the Jewish gay and lesbian community.

PS: Back from a week long trip to Aberdeen meeting my oldest and dearest friends from Edinburgh University. Let me just say that an eleven hour trip by coach with a hardly operating toilet is a not-to-be-repeated experience.
Posted by Paul Halsall at 8:57 pm 1 comment: