View of Winter Hill, Lancs, from My Window 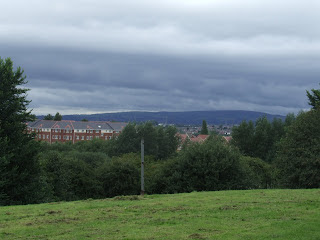 Posted by Paul Halsall at 5:31 pm No comments:

Free Speech in the UK

In the UK there is a considerably greater range of commonly-expressed opinion than in the US, but one of the things I have noticed since I returned is that legal protections for free speech are rather less than under the US system.

For example "incitement to hatred" charges are used in the UK to prohibit all sorts of speech about racial and religious groups that would be considered protected in the US. In general, I prefer to know who hates me, and hence prefer the US system.

I am not, by the way, a liberal. I would define myself as a Democratic Socialist (in terms of class and welfare politics) with libertarian tendencies (in terms of personal behaviour such as sexual practices, drug use, etc.)
Posted by Paul Halsall at 12:17 pm 2 comments:

Like a lot of people this summer I have read Richard Dawkins' The God Delusion.

My take? The books consists of lots of cheap shots, and an myopic idea of what rationality, erudition, and culture consist of.

And here is a problem: Dawkins rightly criticizes religious intolerance, and repeatedly refers with historical accuracy to Christian Antisemitism (for instance his peroration on the case of Pope Pius IX and Edgardo Mortara). But Dawkins' prescription - that children not be brought up as part of the the religious community in which they are born(*) - if applied to Jews would lead to the immediate destruction of all Jewish communities everywhere. If he wants a world without Jewish children, then he wants a world without Jews,

Now, what do you call a person who wants a world with Jews?

Of course, Dawkins is not "Antisemitic" in any vulgar way. It's just his prescriptions would lead to a Jew-free world. Nasty.

(*) In an odd oversight, Dawkins neglects to mention that the one group he attacks most often - American evangelicals (a group that, in general, I have little truck with) - do NOT teach that their children are Christians simply because their parents are.

Baptists and Pentecostals (e.g. Assembly of God, the Church of God in Christ) insist that all members must make a personal decision *at an age of sentience* to join their churches. The Amish, another group he attacks, specifically release their children into the world after high school and require them to make an adult decision. Dawkins on this issue has either not done his homework, or simply twists his facts to suit his agenda. Given the methodology of the rest of the book, it is likely he is doing both.
Posted by Paul Halsall at 10:42 am 4 comments: