What Our Soldiers Are Dying For

Iain Dale's Diary: Is This What Our Soldiers Are Dying For?

I just read on Andrew Nutt's blog the following about a new law which has come into force in Afghanistan...

A new law was recently passed that an Afghan husband is allowed to starve his wife if she refuses to have sex with him. A woman must have also her husband’s permission to work. An earlier bill asked Shia women to have sex with their husbands every four days at a minimum. It also removed the need for consent to sex within marriage, effectively condoning rape. This amended version has been published in the official gazette and become law.

Surely this can't be true, I thought. Is this what our armed forces are fighting for? But yes, it is true. HERE's the report from MSNBC.

And there was me thinking we were there to bring freedom and democracy to the people of Aghanistan. How naive."

Our soldiers (my nephew Nick is in the Royal Marines) are fighting so that we can control a cauldron of extremism in the far-middle east.

Most of the people there (male and female) are not in any essential way reachable by any military or diplomatic methods.

The terrorism is fueled by by our dependence on oil, and the power that gives religious elites, both Shia and Sunni, and if not them, thugs like Saddam. We rightly support Israel's right to exist, but its position as a western cipher in the region makes everything else worse.

We need to keep the military lid on the region; decrease our need for oil from the region; and de-toxify the presence of Israel (which is now home to many religious extremists just as gross as the Taliban).

What else can we do?

I mean, seriously this is not even a party issue in the UK.
Posted by Paul Halsall at 8:29 pm 1 comment:

I suppose it keeps you cool and hard at the same time.
Posted by Paul Halsall at 10:30 am 4 comments:

Capping private wealth would be an admission of defeat - Really?

Capping private wealth would be an admission of defeat | And another thing...:

"This proposal has “securing our core vote” written all over it. Except it wouldn’t, because once you’ve addressed the understandable anger at certain individuals’ exorbitant salaries, pensions and bonuses, you’re left with the principle that a Labour government is setting a ceiling on individuals’ wealth. And that’s not what governments should be doing, because once you’ve established that principle, once you’ve raised a few cheers by ostentatiously depriving some bankers of their bonuses, where do you go next? What do you do when the media get round to identifying the next figures of public hatred? Target them too? How far down the scale do you go? After all, multi-millionaires may not be able to justify their bonuses to the general public, but neither can civil servants earning six figures or MPs earning five justify their incomes to some of those living off benefits."

The working class (or even nowadays the “underclass”as the elite call them) has never really been good at class warfare. Indeed many working class people don’t really think in class terms.

But that insouciance stops once you get to the middle class, and even more the upper middle class (i.e. those with private schools, Oxbridge, daddies who “know someone who can help you”.)

It’s that middle class that wages a ceaseless class warfare to keep its own privilege.

These super high salaries were in no way deserved. They were the salaries of people who had found a way to commit moral fraud and/or engage in asset-stripping.

Tom needs to rethink this.
Posted by Paul Halsall at 10:24 am 2 comments: 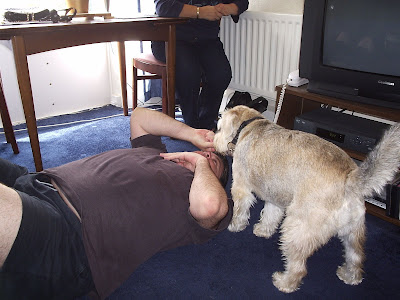 Chalky is 3 years old, half beagle/half schnauzer, but pretty much all terrier. He is committed to appearing committed, likes to toss his food bowl, chase cats, but does not pull too hard on his leash. With any luck he will force me to loose 25lbs.

His birthday from now on is 17 August.
Posted by Paul Halsall at 9:19 pm 2 comments: