Labour loses faith in multi-culturalism
At his press briefing yesterday, the Prime Minister made it clear his Government's approach to cultural diversity had changed. He may have couched his position in careful language, but the conclusion was inescapable: integration, rather than multi-cultural separatism, is now official policy. By saying that he "fully supported" the decision of Kirklees council to suspend the Muslim teaching assistant who had refused to remove her veil at work, and then reinforcing this point with the observation that the veil was a "mark of separation", Mr Blair removed any doubt about the Government's position.

He was, in effect, affirming that the contentious views expressed over recent weeks by Jack Straw, Ruth Kelly and John Reid were not maverick individual opinions, but part of a larger, concerted revision of the Cabinet's stand. Mr Blair, unsurprisingly, wanted to avoid the appearance of an outright volte-face: at one point, he suggested that there should be "a balance between integration and multi-culturalism". This would be a logical impossibility, since the policy of multi-culturalism, as it has been understood and practised, is antithetical to integration.

Ministers are now clearly ready to embrace the argument that they have attacked for many years as insensitive, even bigoted: if Britain is to succeed in absorbing diverse peoples, ethnic minorities must accept the mores of their adopted country. Private religious observance should always be respected, but its practices cannot be permitted to contravene either civil law or the social rules that make community life workable.

Most crucially, the Government's new stand implies that there is an obligation on the part of all those who settle in this country to relate to the larger society and to accommodate its expectations. As the shadow home secretary, David Davis, has said, we cannot afford to encourage a form of "voluntary apartheid" by allowing minority groups to withdraw into cultural isolation. Mr Davis described this as a "series of closed societies within our open society". In fact, such separatism, which the philosophy of multi-culturalism promoted, is a threat to the very existence of an open society.

With all the current fuss over Muslim women choosing to wear veils, I think it is also worth pointing out that many Catholic women wore veils until recently, and that a veil can be a source of womens' power.

The end result was that a de facto Catholic female clergy in effect ended up giving up a kind of social power.

A moderate Muslim woman in a hijab (i.e. the recent Lebanese invention of a scarf like veil - one that looks just like a a Greek Orthodox nun's veil - could be seen as giving a certain social power and respect.

This is not a conflict of civilizations issue.
Posted by Paul Halsall at 6:29 pm No comments:

Animals are Just as Gay as Republicans

Penguins regularly form same-sex pairs. Photo: Per Aas/NHM-Oslo
Curators say a Norwegian exhibition on homosexuality among animals has been well received, despite initial indications of strong opposition.
The Oslo Natural History Museum opened the show last week and says it has been well attended, not least by families.

Organisers reported early criticism of the project, and being told by one opponent they would "burn in hell".

But there has been strong interest in an aspect of animal behaviour the museum says is quite common.

It says homosexuality has been observed among 1,500 species, and that in 500 of those it is well documented.

Animals can be queer as well - 10% or Penguins in fact. One could expect it of Flamingos, but Penguins?
Posted by Paul Halsall at 6:05 pm 1 comment: 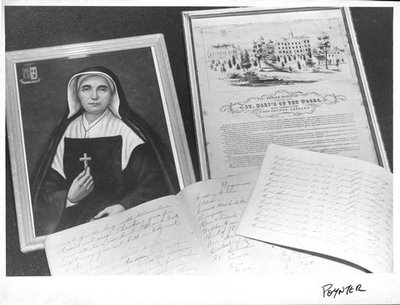 Pope Benedict XVI does not seem to be such an canonization-maniac as John Paul II (to whom over half of all canonized saints can be attributed). [It's worth pointing out, I suppose, that "canonization", i.e. papal naming as a saint, is a fairly recent development: most named Catholic saints have never been "canonized" in any formal procedure.]

Mother Theodora Guerin (I see no need to use the male form of the name) has won plaudits from the liberal media, such as NPR's All Things Considered 10/16/2006.

Why? Basically because she told the local bishop, in the nicest possible way, to fuck off when he tried to control her and her order.

In the history of sainthood this canonization of a loyal servant of Christ is nothing new.

What do you think my chances are? I think they are good. The Virgin Mary will get me in the back door, then St. John Newman, SS Sergius and Bacchus, St Sebastian, and all the other heavenly queers will work for my eventual canonization.

I am still working out what I want to become patron saint of.
Posted by Paul Halsall at 10:04 pm 3 comments:

Translation: Terrence has two fathers, loves them both a lot, and is proud to sing to them. A hymn of love showing that homoparenting is good parenting and full of love. Recorded from a transmission of the (Dutch) TV show "Kids sing for Kids."
Posted by Paul Halsall at 3:32 pm 1 comment: