This was my favourite song as a kid. Mary Travers died to day. May her soul Rest in Peace.
Posted by Paul Halsall at 11:27 am 1 comment: 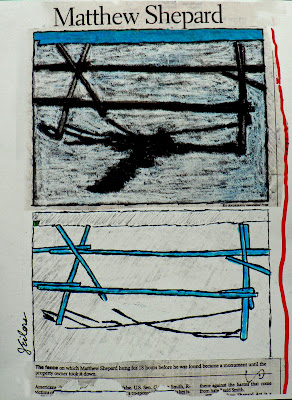 This initially seemed to me a lousy article. I am HIV+ and I once snorted enough coke you would not believe it. I even tried Meth (but did not like it).

Nothing I did would justify me being hanged out to die on a fence in Wyoming.

I do (after rereading several times) see the point of the article. Yes yes Jesus has a penis and pee'd, etc.

But we need our saints.

I recall the Matt Shepherd incident very well, and in fact went on the NYC March on the subject (where I had to convince my dearest friend N. that it was not a good time to test out Gandhi's theory that police horses would not trample you).

Saints do seem to become less human as they are deified, but that is not really true. Take the example of Mozart: we all know that he was a dirty mouthed kid, but in his music he touched God..

Saints are people who are touched in some aspect or for some moment in their life by God. And by God I mean here a profundity beyond the norm.

I'll try to write more on this: the basic point is that saints are "holy" not "good". Perhaps that is just a Catholic thing.

PS. As to obsessing on Jesus' Penis or Urine or Shit (I though capitals were appropriate for the Divine). Sure he did all those, but obsessing on it is a kind of transitional OCD. Many (usually) male children go through a period when they cannot get the thought of sex with their mother out of their mind. Some Gay male Christians cannot get the idea of blowing Jesus out of their minds.

The solution to these thoughts, in both cases, is not to worry. They will go away. Your Mum will still love you, and so will Jesus.

If you obsess too much, just give thanks Jesus was circumcised.
Posted by Paul Halsall at 5:47 pm 1 comment:

We clearly are living with the embers of a dying regime.

The best we on the left can hope for is to limit Tory advances, perhaps even produce a lame Tory-Lib Dem coalition, and a short Tory interlude.

Labour's efforts should be all on a) making the poorest safe, b) ring fencing the NHS, c) explaining to public sector and the manufacturing/construction sector (still a big section of the economy) that Labour is best for them, d) repelling all claims that a public sector worker is not an economic contributor while a private sector work is, e) getting benefit recipients out to vote.

Above all, it's important to get the Lisbon treaty approved as this will do more to help the poor than anything else.

The Irish will vote for it this time. And it will go through.

Then Gordon Brown should be made to resign, and whoever is best to deal with opposition should take over for the necessary election.

My heart goes to Cruddas and Harman. Sense tells me Alan Johnson would be the best caretaker.
Posted by Paul Halsall at 12:44 pm No comments: